When the United States began producing precious metal bullion coins in the mid-1980s, the first gold coins were minted in a 22 karat standard. The obverse of the new coin was a copy of the acclaimed 1907 Saint-Gaudens gold double eagle, the reverse an image of a family of bald eagles by Miley Frost. The Presidential $1 Coin Act of 2005 authorized the production of a new bullion coin, a “$50 gold coin that É weighs 1 ounce, and contains 99.99 percent pure gold.” James Earle Fraser’s native American obverse, bison reverse designs for the 1913 Indian Head or Buffalo nickel were reused for this coin. The effort to create a higher purity coin was a response to the efforts of other countries in increasing the bullion coin purity standard, perhaps most obviously Canada’s .99999 pure $350 gold coin introduced in 1998.

In March, 2008, U.S. Mint Director Ed Moy announced that the U.S. Mint would recreate the original Ultra High Relief gold double eagle design. The 1907 examples of Saint-Gaudens’ pieces are considered patterns, with fewer than 20 examples likely surviving. Through President Theodore Roosevelt’s insistence several thousand High Relief double eagles were released shortly thereafter, but the technical issues of minting coins with such depth eventually became paramount. It was left to the much-maligned Chief Engraver Charles E. Barber to modify the artistic craft of the coin so that production needs could be met. However, in the past one hundred years, advances in minting technology made a contemporary recreation of the boldness of the original feasible. For the new High Relief design, Director Moy echoed Teddy Roosevelt’s sentiments in his announcement that “We want to spur the highest level of artistic excellence in American coin design.”

Original Saint-Gaudens plaster coin molds were used, digitally mapped and reproduced in the die-making process. Several design modifications to the original were made. Most obviously, the new coins are smaller in diameter (27mm, the same diameter as the last $10 eagles) but thicker (4 mm). Four stars were added to the obverse next to the rim, increasing the 46 of the original to a total of 50, to represent the current 50 states. The motto “In God We Trust” was added to the reverse, though it was not on the original High Relief pieces (the motto was added to double eagles in 1908). A small flattened rim was added to both sides, and the finish has been described as satiny rather than the brilliant proof surface of the original patterns. Each production coin is struck twice to bring up the full details of the design.

The obverse features a full-length image of Liberty, facing forward with an olive branch in her left hand and a raised torch in her right hand. Draped in a long, flowing gown, her hair is swept to the left. Some describe her as striding forward, but she appears instead to be in a pose; the foot of her left leg rests on a large rock, in front of which are oak leaves. To Liberty’s right, at the bottom left of the coin, the sun is visible behind a depiction of the U.S. Capitol building. Rays from the sun extend upward from behind the Capitol and Liberty, to about the level of Liberty’s waist. At the top of the coin is the word LIBERTY, the torch separating I and B. Fifty tiny six-point stars (representing the number of states) are arrayed just inside the flat rim, forming a circle broken only at the very bottom. The date MMIX in the original Roman style, each letter separated by a centered triangular dot, is at the right bottom, above the rock, and a monogram of the designer’s initials ASG is below the date.

The crest of the sun appears again on the reverse, at the bottom with rays extending upward nearly to the top of coin behind a majestic left-facing eagle, wings uplifted in flight. In an arc at the top edge of the sun is IN GOD WE TRUST, each word separated by a centered dot. At the top edge is UNITED STATES OF AMERICA in a concentric arc next to the flat rim, with TWENTY DOLLARS just below in another arc. The words of both phrases are separated and flanked by centered triangular dots, and the text is in front of the sun’s rays. E PLURIBIS UNUM in raised letters, the letters separated by thirteen raised six-point stars, is on the edge of the coin. The first Ultra High Relief Saints were minted at West Point, with the very first coin struck by the Mint Director and then placed in the Smithsonian Institution.

As with all U.S. Mint bullion coins, Ultra High Relief Double Eagles are sold because of their intrinsic metal value, but are also avidly collected for their numismatic interest. Unless by accident or unknown intent, these coins do not circulate. Over one hundred thousand of Regular strike pieces have been minted, with certified coins graded as either MS69 or MS70, and some with a Prooflike designation. Many collectors choose to keep their Ultra High Relief Saints uncertified in the original mahogany presentation box provided by the U.S. Mint. Prices for the UHR Saints are 30-40% above gold value, with an added premium for certified examples. “Perfect” 70 examples, First Strike, and Prooflike pieces are higher priced than MS69 coins.

Specifications:
Specifications:
Designer: Based on designs by Augustus Saint-Gaudens and Henry Hering (Saint-Gaudens’ collaborator).
Circulation Mintage: Over one hundred thousand.
Proof Mintage: None.
Denomination: $20 (worth much more either as bullion or as a collectible)
Diameter: 27 mm
Metal Content: 99.99% gold
Weight: 1.000 troy ounce
Varieties: First Strike issues have been designated 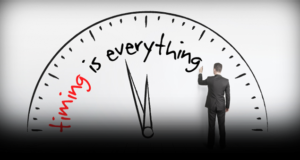 Timing In The Market Is Everything!