From 1970 to the end of’73 and beginning of ’74 equities went on a tear, while commodities wallowed. But when the oil crisis hit, roles reversed. Between 1985 and 1990, equities went on a tear again, but the 1990 Gulf Crisis once again reversed the trends. If you were to chart this information, by creating a chart that plots the S&P Commodities Index divided by the S&P Index, you’d see that the last time the ratio was at current levels was at the peak of the Dot.Com Bubble, in 1999. There were expectations for continued growth and technology was leading the markets. However, the S&P Commodities Index outperformed the S&P 500 Index by a factor of 4:1 over the next decade. We’re in an identical situation right now and the coming reversal cannot be prevented.

However, this time around, gold and silver are at one-third and two-thirds of their all-time highs, respectively. So capitalizing on near-record market highs at this time and converting a greater portion than before to precious metals could prove to be the best financial move, both offensively and defensively. It allows you to capture earned profits and lock into a commodity that has more potential than previous rounds. Technology is scheduled to play a larger and growing role in the Trump Administration’s infrastructure plans. Back in March, a new bill was passed that will dramatically improve the speed of the country’s current 4G wireless network. It’s going to require a massive build out of many more ‘micro’ cell towers at much shorter distances. New phones will be needed too. Industrial demand for gold and silver will increase significantly in that area alone.

Growing trade tensions, rising interest rates, and a slowing economy are combining to initiate the market reversal. Diversification is a word that’ll be coming back around, as more and more investors begin to read the writing on the wall. Lots of important reports are scheduled to come out before the end of the month and if they’re not reflecting this new market condition yet, they’ll probably be the last not to. We’re on the cusp.

Gold and silver are both going to benefit from the coming reversal, but silver in particular may prove to be very impressive this time around. Lower prices have inhibited mining. Growing infrastructure needs are increasing demand and when investors begin to diversify en mass, prices have room to soar. The current gold:silver ratio is almost 1:79, which makes silver a golden opportunity, if you’ll pardon the pun. But regardless, don’t lose the farm trying to squeeze out another ten percent from this long-in-the-tooth bull market. And no matter what, don’t get caught without a chair when the music stops! Call American Bullion at (800) 653-4653 for immediate professional assistance. Call now! 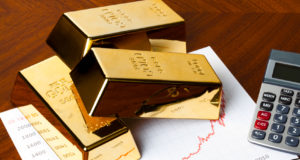